I have many pet names, but mine is Azman Shah Othman(Rakyat Post)

I have many pet names, but mine is Azman Shah Othman 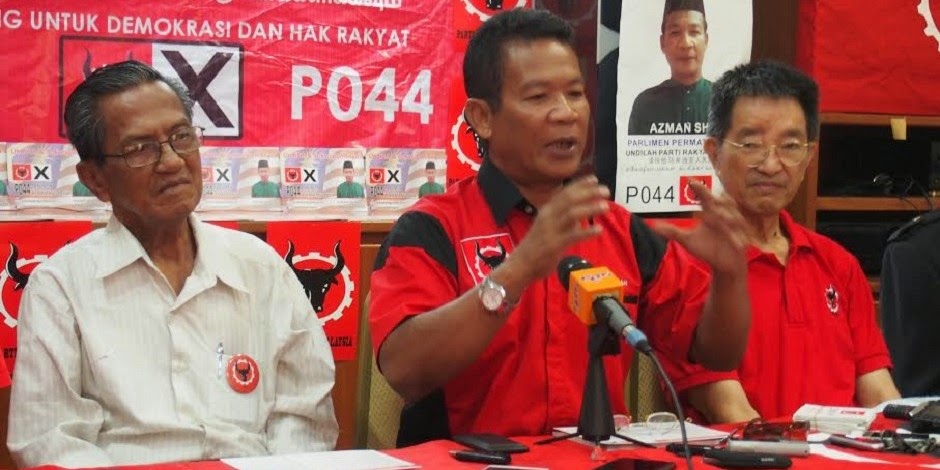 One-month-old Parti Rakyat Malaysia (PRM) member Azman Shah Othman was named as its candidate in the Permatang Pauh by-election, amidst controversy and inconsistencies.

It was previously reported that former Penang PRM chairman Datuk Gary Nair called on Azman to withdraw from the by-election.

The central leadership later refuted that claiming Azman was a candidate of their choosing.

Azman,50, a businessman, entered the race in controversy on nomination day, when he told reporters his name was Azman Shafie and that he was an independent candidate.

At the press conference today, he denied ever giving that name.

“I have many pet names but my name is Azman Shah Othman.

“I said I was independent because I am not aligned to either Barisan Nasional or Pakatan Rakyat. I was not well, it was very hot there and I was thinking of all kinds of things,” he said at a press conference at Safira Country Club, here today.

He said the party did not have a manifesto and people did not have to hear from him as they could always go for ceramahs held by BN and PR.

“I have held small greet sessions with voters, but let BN and PR hold their ceramah first and we will show up at the end to brainwash them and surprise them.”

When asked if he supported hudud, he said the party did but wanted a detailed explanation as many aspects of it was still unclear.

The candidate who claimed he knew a little Mandarin because he studied in a Chinese school, alleged although he had only been a PRM member for one month when he joined on April 9, he was the perfect choice for the people to have their voices heard in Parliament.

“I want to help channel their disappointments and meet their needs as their representative.”

PRM president Ariffin Salimon, 77, meanwhile said the party did not support the Sedition Act 1948 and the implementation of the Goods andServices Tax (GST).

“The GST burdens the low income people, this is our stand.”

PRM secretary-general Koh Swe Yong said Azman’s nomination was the first northern zone candidate of their party in over 40 years.

“The decision to field him was last minute and there was some confusion between our members about that.

“We want to announce that he is our candidate and despite us not having alliance with any coalition, we are willing to work with anyone that can bring benefit to the people.”

Party vice-president and PRM northern zone coordinator Goh Chuin Loon said Azman was chosen despite being a relatively new member, because the latter was local and the party found he had what it took to be the candidate.

“We at the PRM northern zone suggested him and the central leadership agreed.

“We classify what happened with Gary Nair as a miscommunication and despite that we want to say that we value his contributions to the party.”
-The Rakyat Post
Posted by Charles Hector at 12:16 AM