We, the 87 undersigned civil society organisations, trade unions and groups call on RENESAS Semiconductor KL Sdn Bhd (formerly known as NEC Semiconductors (Malaysia) Sdn Bhd] to respect the freedom of association and the right to effective recognition of the right to collective bargaining,  being one of the basic rights of workers and one also one of the core values of International Labour Organisation (ILO)'s.  RENESAS must stop obstructing or delaying, and immediately accord recognition to Electronic Industry Employees Union Western Region, Peninsular Malaysia (EIEUWR)/ Kesatuan Sekerja Industri Elektronik Wilayah Barat Semenjung  Malaysia(KSIEWBSM)[UNION] so that workers at RENESAS can at last begin to enjoy the benefits of collective bargaining agreement.  It has been more than 3 years since the UNION first applied in January 2010 for recognition by RENESAS.

In Malaysia, after being registered, recognition by the employer is needed before the UNION can start negotiating and enter into any Collective Bargaining Agreement with the employer company. The UNION has to submit a claim for recognition, and within 21 days, the company can accord recognition or not. If not, then the Director General of Industrial Relations (DGIR) steps in and start the process of conducting   a secret ballot to ensure that more than  5o% plus one of the qualified workers is for the union – then the union is accorded recognition, and thereafter can effectively represent the workers.

Even though  about 70% (1,300) of RENESAS’s workers eligible to be members of the  union were already members of EIEUWR when the first application was made by the UNION to the company for recognition, RENESAS did not accord recognition and after more than 3 years and RENESAS still refuses to recognize the UNION.

On 18/1/2010, EIEUWR submitted the 1st application for recognition to RENESAS. The company responded that there was a pro-tem in-house union, which was unregistered, also seeking recognition. The Director General of Industrial Relations (DGIR) rejected this reason. Then, RENESAS claimed  that they did not receive the claim for recognition, when the application had been hand delivered personally by Wan Noorulazhar, the Union President, and RENESAS acknowledged receipt. The DGIR later asked the Union to send again their claim for recognition.

The 3rd claim for recognition was submitted to RENESAS on 8/10/2010, and this time using the National Courier Poslaju. After receipt of the UNION’s  letter, RENESAS  send it back to Poslaju asking that the letter be returned  to the UNION. Poslaju provided a letter confirming this. RENESAS could not deny receipt this time, and rightfully the DGIR should have done the needful which was to the conduct of a ‘secret ballot’. But, there was inaction on the part of the DGIR for many months despite repeated demands by the UNION, and finally on 12/8/2011, the UNION had a picket in front of the Ministry of Human Resources. The DGIR then informed the UNION that the said relevant documents had been misplaced, and the blame was put on the Deputy DGIR responsible, who allegedly has since then been removed from that position. The DGIR  then asked the Union to submit yet  another  claim for recognition.

The 4th claim for recognition was made on 8/9/2011. RENESAS’s now challenged the validity of the registration of EIEUWR(the UNION) itself, and the qualification of the UNION’s General Secretary, one Bruno Gentil Pereira. When the Minister rejected this objection on 9/4/2012, RENESAS proceeded to filed a High Court case to challenge the Minister’s decision on 8/5/2012, whereby on 28/6/2012, the High Court dismissed the RENESAS’s  application. RENESAS then appealed to the Court of Appeal who also unanimously dismissed the case on 5/12/2012.
After the High Court dismissed RENESAS application on 28/6/2012, there was no court order stopping the DGIR from proceeding with the secret ballot but the DGIR did not do anything.

After much protestation by the Union, the DGIR finally started the process by writing to RENESAS to submit Form B, as required by law, on about 14/12/2012. RENESAS did not comply and a second letter  was sent by the DGIR  on 14/1/2013. RENESAS again did not comply, and now it is believed that  a third letter has been sent by the DGIR.

When, and if the day finally comes for the ‘secret ballot’, the workers entitled to vote would be the workers as of the date the claim was submitted, being 8/9/2011 but with the existence of short-term contracts, many of the pro-union workers may  no more be employees of RENESAS, and this will prejudice the UNION, who still will have to show that it has the support of at least  50% plus one of the number of qualified employees as per the list of qualified employees on 8/9/2011. The tactic of delaying the secret ballot works in favour of the employer, and prejudices the UNION.

Wan Noorulazhar bin Mohd Hanafiah, an employee of RENESAS who is the President of the UNION was dismissed on 26/8/2011 by RENESAS whereby the alleged misconduct, was that his actions were ‘contrary to explicit company policies’. He allegedly made statements about treatment of workers in a closed Facebook Group, whose members were fellow workers. The alleged misconduct It had nothing to do with his work performance. The wrongful dismissal case is now before the Industrial court.

The current trend at the Industrial Courts when it makes a finding the worker has been wrongfully dismissed by the employer is not to order reinstatement, but to rather order compensation.  If not reinstated, workers of RENESAS would be deprived of a leader. RENESAS can at any time reinstate  Wan Noorulazhar bin Mohd Hanafiah  without  loss of benefits.

On 14/3/2013, EIUWR and the workers of RENESAS again had a protest picket at Putrajaya.

For and on behalf the 87 organisations listed below

Senator Syed Shahir bin Syed Mohamud - Senator in the Malaysian Parliament, the Immediate Past President of the Malaysian Trade Union Congress(MTUC), and Executive Secretary to the National Union of Transport Equipment and Allied Industries Workers.

Posted by Charles Hector at 6:45 PM No comments: 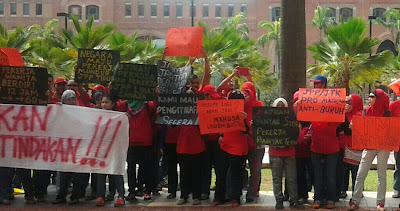 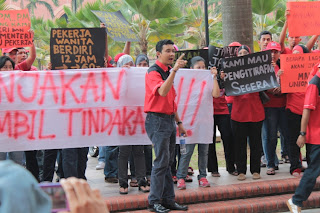