With UMNO-BN wiping up the divide and rule religio-racial politik the future of PRM is still tortuous dan distant.
Posted by Charles Hector at 7:37 PM No comments:

KUALA LUMPUR: There is growing youth support for socialist ideology but still not many young people are keen to get involved in political parties and elections, says Parti Rakyat Malaysia chairman Dr Rohana Ariffin.

“This seems to be the general trend throughout the world where youths would support popular movement and demonstrations over pertinent issues but they are reluctant to be a member of a political party,” she said at the 45th PRM national congress on Sunday.

On PRM, Dr Rohana said although the party was small, it's presence was essential for the betterment of the people and in helping to solidify the progressive movement in the country.

“Being one of the oldest political parties since its inception in 1955, it has been and shall continue to play a very important role in trying to bring about unity of all the races in this diverse society," she said.

In the party's manifesto, PRM had urged for a proportional representation system (PR) instead of first-past-the post that gives advantage to bigger and financially-stronger parties.

"PRM's basic principle is that all voters deserve representation in the legislature. In other words everyone should have the right to fair representation.

"First-past-the-post system is akin to gambling. It has affected smaller parties. For PRM, it's due to it's inability to sponsor candidates and spread its campaign objectives," Dr Rohana said.

Dr Rohana said it was still a long and winding road for PRM and urged members to work harder especially in other states to rebuild some of PRM's past glories.

"Although PRM is now visible in Kuala Lumpur and Selangor, it's existence in other states is still lacking.

"We have to soldier on. As the Malay proverb goes 'Biar putih tulang, jangan putih mata' (it is better to die fighting than to live crying in regret till the eyes becomes blind)," she added.

Posted by Charles Hector at 7:29 PM No comments:

PRM, a third political force in the making? (FMT News)

PRM, a third political force in the making?

Priscilla Prasena | November 9, 2013
Ex_DAP man's move on Parti Rakyat Malaysia is to prepare the party to take on the two political heavyweight, which he claimed are failing the rakyat.

PETALING JAYA: Parti Rakyat Malaysia (PRM) is being revamped and would appear as a third force in the Malaysian politics with an ex-DAP veteran driving it in Selangor.

Deliganu Alagan, 66, said he will be focusing on Klang and other regions in Selangor while reinventing the party to a true socialist concept, which was being championed by its president Dr Rohana Ariffin.

Commenting on the need for a third force in the Malaysian politics he said both Pakatan Rakyat (PR) and the ruling coalition (BN) had failed to look into the welfare of the people and each of them were protecting their interest.

“It is because both the political parties have failed that we need a third force to protect the interest of the people,” Deliganu told FMT.

Deliganu said it was time for the country to have a third political force and about 25 ex-DAP members would now join him in this party to serve the public better.

He added that the main agenda of the party would be looking into building low-cost houses for the low to middle income people as well as to serve the interest of the poverty stricken residents of Malaysia.

“We would want to see poverty eradicated and the wealth of the country equally distributed to every citizen of the country,” he added.

Speaking to FMT, he said as a socialist, PRM had been fighting for all issues affecting all races, however Indians in the country were the worst affected by poverty.

Ahmad Boestamam, an activist with the leftist Kesatuan Melayu Muda (KMM) movement, founded PRM in 1955. The party was renamed Malaysian People’s Socialist Party (PRM) and it officially adopted scientific socialism as its ideology. Despite the re-orientation of the party, the post-1969 political scenario meant that the party remained in the sideline.

It was believed that due to the growing tension between some former PRM members, who were now in PKR, with the party’s leadership was due to an alleged growing influence of neo-conservatism.

These members were not comfortable with the merger and found a rallying point to express their dissent, particularly towards the former leadership who negotiated the merger.

Being sacked by DAP was his turning point

The grassroot DAP leader said his sacking from DAP was the turning point in his fight against the party.

The real estate consultant was a founder member of DAP in Port Klang and Pandamaran and was an active member in DAP until 1995. He was sacked from the party in 2010 three years after Bank Negara had declared him a bankrupt.

“I joined DAP when I was 21. I contested in 1990 for the Pandamaran constituency but lost. I even contested in Sementa, Kapar in 1995 but lost there as well,” Deliganu said.

He said Bank Negara lifted his bankruptcy in 2011, making him eligible to contest in the general elections.
“I was a victim. Somebody stole my identity card and used it and I only knew that I had been declared a bankrupt when I received a letter informing me of the same,” he said.

Deliganu subsequently appealed to Bank Negara to review his case and was cleared as a bankrupt in 2011.

In the 13th General Election, Deliganu contested in Pandamaran as an independent candidate and only obtained 62 votes compared to Tan Pok Shyiong, the DAP candidate who won the seat with 9,176 majority. - FMT News, 8/11/2013,PRM, a third political force in the making?

Posted by Charles Hector at 7:42 PM No comments: 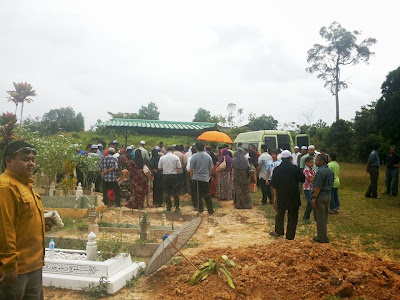